In the first three months of this year Omar paid more than $290,000 to the E Street Group, a fundraising and consulting group run by Tim Mynett, who she married last month.

If she continues at this rate it will mean the company would get a whopping $1.16 million from Omar’s campaign in 2020. It received a total of $523,000 for the whole of last year.

‘Omar’s campaign chest is looking more and more like a dowry,’ Peter Flaherty, the head of a group which has filed a complaint with the FEC over Omar’s spending, told DailyMail.com

‘Most candidates for federal office keep a close eye on their vendors to make sure they aren’t being overcharged, but with her being married to her chief fundraiser the incentive may be the other way round as the money spent is going directly to the family.

‘Basically, her campaign finance disclosures read more like a wedding registry where friends can make gifts to the happy couple,’ added Flaherty, chairman of the conservative National Legal and Policy Center.

The raw figures, released late Wednesday by the Federal Election Commission, show that Omar’s campaign committee, Ilhan For Congress, paid E Street a total of $291,059.91 between January 1 and March 31.

She had been paying the lower two figures through much of her time in Congress, but only started paying the $50,000 figure on a monthly basis in December, soon after both she and Mynett got divorced.

The other $102,000 is for expenses for items such as travel, postage and campaign merchandise.

Omar’s spokesman did not answer specific questions that DailyMail.com put to him regarding the figures, instead pointing to a series of tweets that Omar made last month about her marriage to Mynett and his work for her campaign. 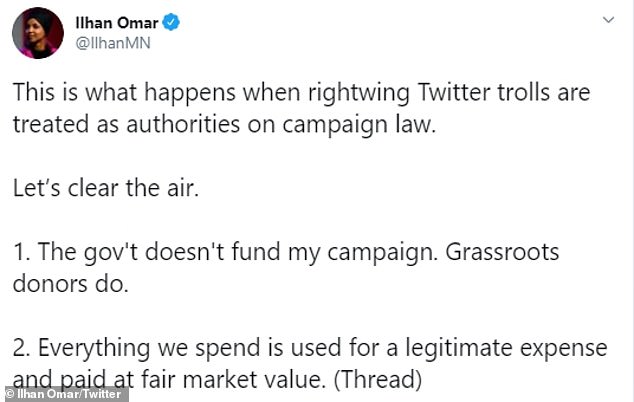 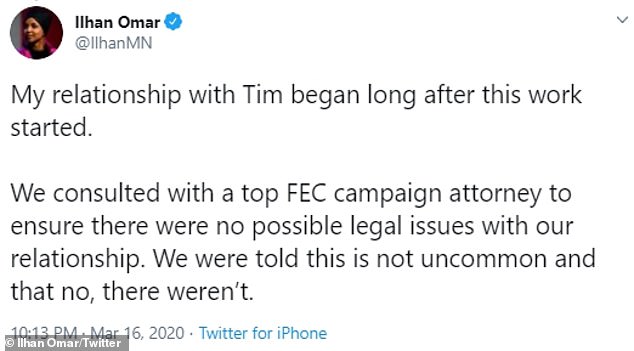 WHAT DO YOU THINK ABOUT ILHAN OMAR’S RECKLESS SPENDING OF GRASSROOTS DONORS FUNDS ON ELECTION CAMPAIGN.

Mother who confessed to killing her 9-year-old son pushed him into Florida canal, affidavit says

Ben Carson To Retire Nancy Pelosi!! Calls For A Convention Of States To Implement Constitutional Term Limits For Both Members Of...

Mother who confessed to killing her 9-year-old son pushed him into Florida canal, affidavit says

Ben Carson To Retire Nancy Pelosi!! Calls For A Convention Of States To Implement Constitutional Term Limits For Both Members Of...

Democrats to plow ahead with proxy voting despite GOP resistance

Ilhan Omar is on track to pay her new husband’s consulting company $1.16M