Pressure is mounting in the US state of Minnesota for prosecutors to bring charges against four Minneapolis police officers over the death of George Floyd, an unarmed Black man.

“What we saw was a public lynching without a rope,” said Leslie Redmond, president of the Minneapolis chapter of the National Association for the Advancement of Colored People (NAACP).

“Enough is enough. We are done dying,” Redmond told Al Jazeera. “We want to see them prosecuted.”

Bridgett Floyd, George’s sister, told ABC’s Good Morning America programme on Wednesday that she feels “those guys need to be put in jail”.

“They murdered my brother,” she said.

Minneapolis Mayor Jacob Frey echoed those calls in a news conference on Wednesday, asking: “Why is the man who killed George Floyd not in jail?”

Floyd died at the hospital late on Monday after Derek Chauvin, a white police officer, knelt on the 46-year-old’s neck for several minutes as Floyd moaned and yelled: “I can’t breathe.”

A video of the incident shows Floyd pleading with police and eventually appearing motionless as the officer’s knee remained on his neck. Bystanders can be heard urging the officer to get off of Floyd.

Medaria Arradondo, the city’s first Black police chief, swiftly fired the four officers involved, a move community leaders acknowledged as “a win”, but said should only be the first step.

“I don’t want to undermine how big of a win it was to Chief Arradondo to fire those four officers the same day the footage was shown to the public,” the NAACP’s Redmond said, highlighting that while it was only one officer who pinned Floyd to the ground “all of them were responsible and played a role”.

“The next step,” Redmond said, was criminal charges being brought against the four officers – identified by local media as Chauvin, Thomas Lane, Tou Thao and J Alexander Kueng.

“What we are seeing is a violation of Black people’s human rights,” Redmond said. “Our humanity has always been denied on American soil.” 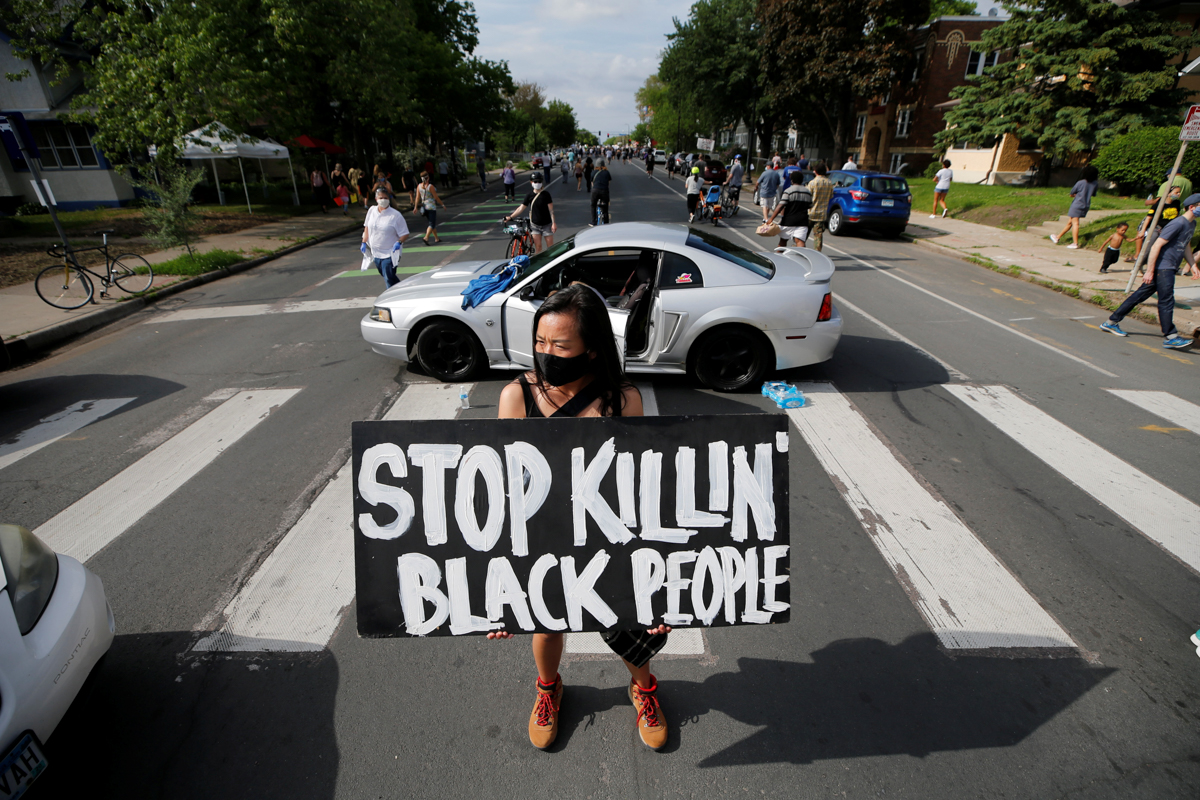 Protesters gather at the scene where George Floyd, an unarmed black man, was arrested by police officers before dying in hospital in Minneapolis, Minnesota [Eric Miller/Reuters]

The Minnesota Bureau of Criminal Apprehensive (BCA) and the FBI are both investigating the incident.

The Hennepin County Attorney’s Office, which will handle the case, said in a statement it was “shocked and saddened by what appeared in a recent video”.

It added that after the BCA and FBI present their findings, it will make a decision on prosecution.

“We promise a thorough, expedited review consistent with our ongoing commitment to justice,” the statement read. “Every person is entitled to fairness; no person stands above the law.”

Redmond said other Black leaders are pushing for resources to be poured into the community and for police officers to be trained by community members to help bridge the disconnect she says has long existed.

Security camera footage, obtained by CBS News, shows Floyd sitting on the ground with his hands behind his back and then walking with police out of frame.

“Security cameras captured moments before the murder of #GeorgeFloyd,” tweeted prominent civil rights lawyer, Benjamin Crump, who is representing the Floyd family. “He was clearly NOT RESISTING arrest… So WHY did Minneapolis Police officers use excessive force that ultimately resulted in his death?! WE DEMAND ANSWERS.”

Security cameras captured moments before the murder of #GeorgeFloyd. He was clearly NOT RESISTING arrest… So WHY did Minneapolis Police officers use excessive force that ultimately resulted in his death?! WE DEMAND ANSWERS. #JusticeForFloyd #SayHisName pic.twitter.com/4yGxvTY2Ln

It is unclear what happens between the time Floyd and police walk out of the frame and the time when a bystander’s video shows an officer pinning Floyd down to the ground with his knee.

The Police Officers Federation of Minneapolis issued a statement on Tuesday, saying its officers were cooperating with investigators and urged “now is not the time to rush to judgement”.

‘No justice, no peace’

Calls for justice for Floyd have reverberated across the country, with hundreds of protesters taking their demands to the streets of Minneapolis.

On Tuesday night, demonstrators filled the intersection where Floyd was pinned down, chanting “I can’t breathe” and “no justice, no peace”. Floyd’s death has been compared to that of Eric Garner, an unarmed Black man who died in 2014 after being placed in a chokehold by New York City police and pleading: “I can’t breathe.”

Video from Tuesday’s demonstration showed police using tear gas against some protesters who marched to a police precinct. There were also reports of non-lethal projectiles being fired by police. Authorities said some protesters destroyed a window of the precinct and sprayed graffiti on police vehicles. 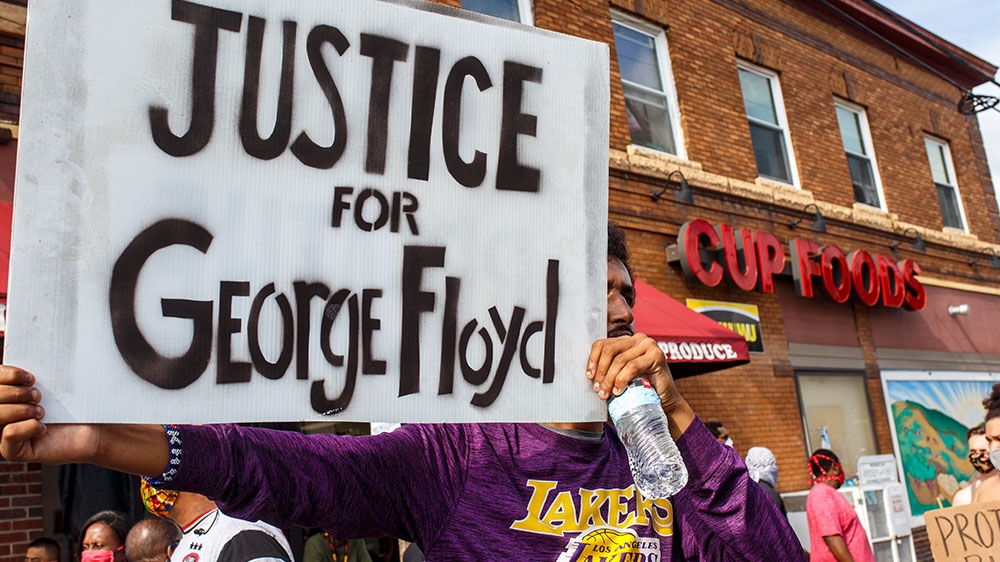 Floyd’s death comes on the heels of several recent cases of a Black man or women being killed by police or former law enforcement.

The FBI are also involved in recent investigations in Louisville, Kentucky, and Glynn County, Georgia.

In Kentucky, 26-year-old Breonna Taylor was killed by police on March 13 as they served a warrant in a drug investigation. Police said they were returning fire from Taylor’s boyfriend, who said he fired in self-defence, believing someone was breaking into the apartment. No drugs were found.

In Georgia, the US Justice Department is weighing hate crime charges in the February 23 shooting death of 25-year-old Ahmaud Arbery, a Black man killed while running in a predominantly white neighbourhood. It took more than two months and a viral video for police to arrest Gregory McMichael, a retired investigator for the local prosecutor’s office, and his son, Travis, both of whom are white. The McMichaels claimed they believed Arbery was involved in a burglary and he was shot in a struggle for Travis McMichael’s gun. Arbery’s mother said she believes her son was just going on a jog.

African American adults are nearly six times as likely to be imprisoned or jailed than white adults, according to the Sentencing Project watchdog group.

These racial disparities have given rise to Black Lives Matter, which was founded in 2013 and seeks to end police violence and build local power to intervene in violence inflicted on Black communities.